Note: to keep my half of this blog alive, I've decided to post my occasional Valley Press email newsletters on here too. Enjoy!  - J.M.

As another year of flat-out publishing comes to a close, I look back on 2014 with a modest amount of pride, and a lot of hope for the future - 2015 is going to be huge. But we're not there yet. I've managed to publish two more 2014 books since the November newsletter, and I feel strangely compelled to tell you about them... 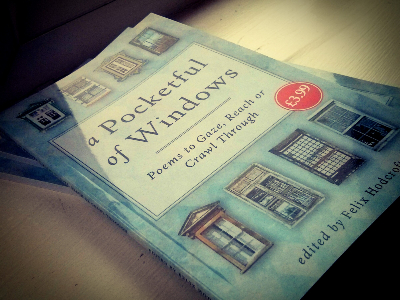 A Pocketful of Windows is an anthology of powerful, original and accessible poetry from writers in North and East Yorkshire; selected, edited and arranged by VP author Felix Hodcroft. The RRP is just £3.99, for which you get 66 poems by 36 poets; aged between 16 and 92, including familiar names and first-timers.

Though formal reviews have yet to arrive, we've had some incredibly positive reactions at the various launch events for Pocketful; and more than 300 copies have been sold so far. You'll be hearing a lot more about this book in future I'm sure - but until then, you can read a sample and more information here. 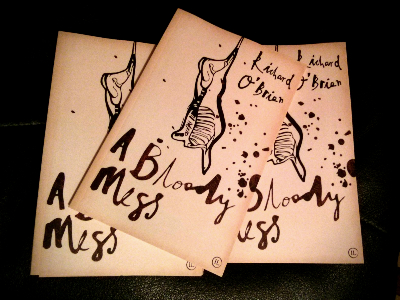 Also out this month: a new title from our Ink Lines imprint, selected and edited by the team at Dead Ink books (particularly, on this occasion, David Tait) and brought into the physical world by Valley Press. It's a marvellous pamphlet of poems by Richard O'Brien entitled A Bloody Mess; newsletter readers can see an exclusive sample here.

If you're not a regular visitor to our esteemed homepage, you may not know that there is a special offer on the go: any two books for £12, with free postage. This won't be around for long, so head over there and make the most of it. (Top tip: when ordering, look out for a prompt that says 'Click 'add' and name your two books now' - that's the important bit.) This is the first ever 'multibuy' offer on the VP site: if it's successful there may be more in future, so there's an incentive if you needed one!

In previous years I have kept my head down and worked through the festive season - pausing only for a sip of champagne on New Year's Eve - but this year I am attempting to genuinely take some time off. This is not simply so I can put my feet up and forget about dispersing quality literature for a while; I am getting married on the 22nd December, and it will be nice to actually see the new Mrs McGarry face-to-face, rather than from behind a big pile of book proofs (which is the usual scenario).

Valley Press will close down at 5pm on Wednesday 17th December, and re-open on Tuesday 6th January; but do feel free to email and order books during that time, I'll catch up when I get back. As for everyone who is waiting eagerly for news and developments on future projects ... just hang in there folks.

﻿﻿I told a slightly silly but true story at the launch of Best Friends Forever last week, about how I first heard of the book's editor, Amy Key. It was back in 2013, when I was trying to learn more about modern poets, and my new boyfriend suggested that I might like Amy Key's work and that he could see us being friends. I replied, 'Thank you for this helpful tip and for taking an interest in my work.' Psych! No I didn't say that, I actually said 'You can't possibly assume that I would be friends with someone, because female friendship is a VERY COMPLEX THING. I can't even begin to explain it to you.' Because I am a delight to date.﻿﻿﻿﻿﻿﻿﻿﻿﻿﻿
﻿﻿﻿﻿﻿﻿﻿

Of course, I did look up Amy Key's work and I found that I loved it, and I do understand why someone might think we could be friends (Are we now? Maybe?! Give it time! Female friendship is a very complex thing! Jesus!). But I also stand by my original sentiment, and by my general exasperation about how female friendships are often misunderstood or just not considered important enough to try and understand in the first place.

My whole life has been defined by female friendships. I met my first best friend at nursery and I used to cry from missing her if her mum picked her up before mine at the end of the day. In year 5 our teachers put us in different classes so we could learn to be apart, and she discovered football and left me behind. Secondary school, a hothousing all-girls grammar, was fervid with changing allegiances as girls grew out of some friendships and into others, while negotiating exams, our bodies, and sex. The novelties of university put my old friendships on the backburner in the first year, but I eventually came back to them and learned to value them immensely alongside my new ones. My friendships at Orion made my very boring job bearable, and the existence of the Emma Press is a direct result of my old school friendship with Rachel Piercey plus the catastrophic end of my university friendship with my two housemates (which meant I moved home and could save up money) plus the indirect result of the support of my other best friends.

And yes, there were dramas with boys, but honestly they were nothing compared to all this. Contrary to what popular rom-coms from the 80s and 90s suggest, best female friendships aren't a sideshow, tacked on to fill in the bits between meeting the love interest – they're the main event. Is Mean Girls about Cady Heron and Regina George fighting over Aaron Samuels? Of course it's not! Because Tina Fey gets it, and knows that the meaty stuff is Cady's friendship with Janis Ian (and Damian) and then the Plastics, and, less in the foreground, the ruins of the friendship of Janis and Regina George.

Infinitely more interesting and frequently more lasting, female friendships strike me as much more worthy of attention than most tedious A+B=Kissing romances, which is why I was so delighted when my possible friend Amy Key emailed me last year with a proposal for an anthology of poems about female friendship. Most definitely yes! All Emma Press anthologies tackle subjects close to the hearts of Rachel and myself, so I'm pleased that our first guest-edited anthology takes a look at one of the foundations of the Emma Press. Amy has collected a truly fantastic collection of poems which celebrate the life-enhancing power of female friendships while not shying away from the darker aspects of such intensity. Her introduction is soul-baring and moving, and I suspect that soon many more women will be asking themselves if Amy Key could be their friend.

* * *
Amy Key has written about her experience of editing the book over on her blog. You can read more about Best Friends Forever on our website and buy the paperback (£10) directly from us as well as in any bookshop (you can order it in if they don't stock it). The ebook (£5.50) is available exclusively on our website.﻿﻿﻿