Interview with Elīna Brasliņa, illustrator of The Dog Who Found Sorrow

We interviewed Elīna Brasliņa about her work in The Dog Who Found Sorrow, a picture book about an adventurous dog whose town has been taken over by dark clouds and smoke...

How did you draw all the smoke?

I made a whole bunch of smudgy clouds by crumbling charcoal on paper and rubbing it in with my thumb. Then I cheated – I scanned all these clouds and, by combining some bits and erasing others, I was able to create these smoky landscapes on my computer.

Where did you learn to draw? 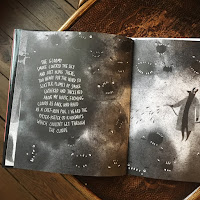 At first I drew pictures of animals from encyclopaedias – I didn’t put the paper over the image and trace it like my classmates did, I looked at it and struggled to draw one that was just as good. I couldn’t, obviously. After that, I drew cartoons I saw on TV, then moved on to Japanese manga characters. It was only when I was 21 and started attending evening courses at the Art Academy that someone actually taught me the basics of drawing. I think all of it helped in some way!

What was your favourite picture book when you were little?

I don’t really remember any picture books – but there were illustrated books that I loved. Tove Jansson’s The Moomins and the Great Flood was one of my favourites. My mother used to read it to me – she did all the voices too – and I would look at the pictures.

Elīna Brasliņa studied Printmaking and Graphic Arts at the Art Academy of Latvia. Since 2014 she has illustrated more than twenty titles, including Moon Juice by Kate Wakeling, which won the 2017 CLiPPA. She has been nominated for numerous awards in Latvia and won the Zelta Ābele (Golden Apple Tree) National Prize for Book Art twice. She was awarded the International Jānis Baltvilks Prize in 2017.

The Dog Who Found Sorrow is available to buy on our website.
Posted by Yen-Yen Lu No comments:

Email ThisBlogThis!Share to TwitterShare to FacebookShare to Pinterest
Tags: Elina Braslina, The Dog Who Found Sorrow

Interview with Rūta Briede, author of The Dog Who Found Sorrow


We interviewed Rūta Briede about The Dog Who Found Sorrow, a picture book about an adventurous dog whose town has been taken over by dark clouds and smoke... 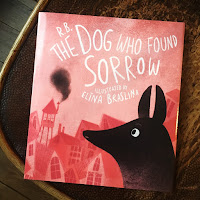 Where did you get the idea for this story?

Well, I’ve always liked clouds. And sometimes when I was little I would sit down on a balcony and watch thunder-clouds coming. And there’s actually nothing you can do to turn those clouds away. But then I thought: what if your sadness or misery was a cloud as well? Can you do something about your own dark, dusty clouds? Can you stop them coming?

Why is the main character a dog?

Because I like dogs and unfortunately I don’t have one. But I would like to. Would you like to? I’ve rarely met a dog who’s sad. They’re almost always so happy. Always up to something. Just like the investigator Dog in my book. 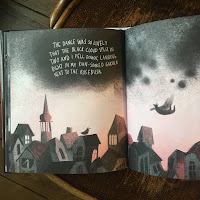 The dog plays the harmonica to cheer up the Sorrows. What cheers you up?

What was your favourite picture book when you were little?

Hmm. When I was little there weren’t very many picture books published in Latvia. And I guess you won’t recognise the names of the picture books I was reading back then. But I read a lot. And one of my favourite books of all was Ronia, the Robber’s Daughter by Astrid Lindgren.

Rūta Briede illustrates books, draws comics, designs puppet shows and teaches at the Art Academy of Latvia. Her first picture book, Queenof Seagulls, earned international recognition and won the International Jānis Baltvilks Prize 2017 for the best debut. Rūta is the artistic director and stage designer for a puppet stage show based on Queen of Seagulls. The Dog Who Found Sorrow is her second book.

The Dog Who Found Sorrow is available to buy on our website.
Posted by Yen-Yen Lu No comments: