This week at Valley Press, #90: 'How to Disappear' 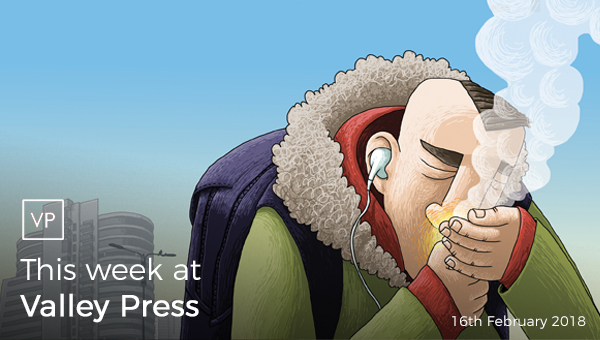 It’s Wendy here again, with the Valley Press fortnightly newsletter. It’s been an exciting couple of weeks at VP HQ, with lots happening, but I’ll start by wishing you all a happy Chinese New Year! We are very lucky to be able to boast two brilliant and highly-thought-of Chinese authors: Yang Zhengguang’s How Old Dan Became a Tree is a collection of short stories which challenge boundaries and are stacked full of dark humour and film-like vividness, while Ye Guangqin’s Mountain Stories is an insightful, creative and often magically absurd collection set in China’s Qinling mountains. We’re proud of being able to explore other cultures and happy to be in a position to bring world literature into people’s lives and onto their bookshelves. If you fancy travelling to China without going anywhere, this is how to do it. (A third entry in this series is to be published in May.)

Next up, we have news of our latest launch and a new venture by Valley Press into the world of graphic novels. Si Smith has produced more than just a comic: as far as storytelling goes, How to Disappear Completely ticks all the boxes. It is intense, moving and truthful, and the artistic representation of the story is incredible; the use of colour and light as metaphor is skilful and superb. I don’t read very many graphic novels, but I have now read this one three times, finding something new to enjoy each time I do. Without wanting to offer spoilers, it is gripping. What I will say is this: we don’t talk about male vulnerability enough, we don’t talk about male mental health enough, and the pressure to ‘get on with it’. By exploring vulnerability, especially in men, and mental health problems, we challenge the taboo around it, so this feels like a very important publication. It explores a very personal journey and does it in a startlingly beautiful way. How to Disappear Completely is launching at OK Comics in Leeds on February 22nd at 5pm. If you’re on Facebook, there’s a Facebook Events Page where you can catch up with all the news surrounding it. It is quite honestly one of the best things I’ve read in a while.

In other news, we were delighted to welcome an aspiring young publisher to the Valley Press Headquarters last weekend. Unfortunately, I completely forgot to take any pictures, so you’ll have to believe me when I say that we had a lovely hour or two chatting about publishing, books in general, the publishing industry in the North, and how to get a foot in the door with secondary school student Evie, her mum Caroline and even Evie’s gran who came along to reminisce about Scarborough. We think it’s really important for young people wanting to work in publishing, as writers and creatives or as the behind-the-scenes team that make the magic happen, to be able to come along and chat to real life people about the realities of that industry. Please don’t hesitate to get in touch with us if you have a young person eager to see how it all works.

That just about sums up this week, except to say that Jamie and Emma have once again provided a brilliant and entertaining podcast, which you can find here (and remember, you can subscribe on iTunes here). One last thing, in the form of a tiny little bit of self-promotion: I am absolutely delighted to say that my poem ‘Nan Hardwicke Turns into a Hare’ will be featured on BBC Radio 4’s Poetry Please on Sunday the 18th February at 4.30pm. I am so excited I can hardly breathe, especially since it is the incredible poet Liz Berry as guest host and I am a huge fan. My own Valley Press poetry collection, Gifts the Mole Gave Me, is available in the Valley Press shop alongside many, many other wonderful Valley Press titles – we also recently published new poetry by Liz herself in our Verse Matters anthology. Anyway, enough talking about me, I hope you have a lovely weekend, and check in on us on Facebook, Twitter or on Instagram. We have a lot of fun on social media, come and join in!

If you are interested in becoming a Valley Press reader and helping us to gauge public reaction to potential books, drop us a line; and if you or your publication are interested in reviewing any of our titles, do get in touch. Independent publishers need all the support they can get, we’re passionate about our authors and want to support them on their writing journey; spreading the word about their work seems one of the best ways to do so.

In the meantime, have a bookish weekend! 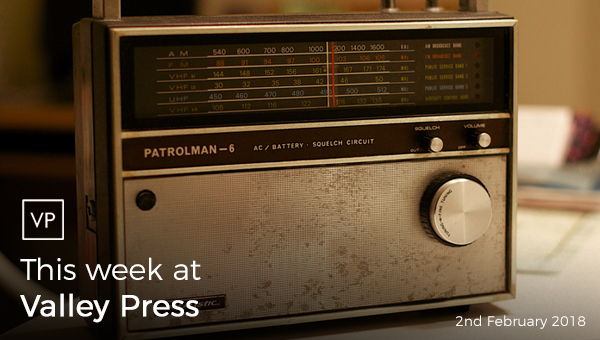 Jamie here! We had a great response to Wendy's newsletter two weeks ago (this is a fortnightly bulletin now, remember), and in fact even Mrs McGarry – when pushed – was forced to admit it was a small improvement on the usual communications. That being said, I'm not ready to disappear behind the gates of my chocolate factory just yet, so you can still expect to hear from me occasionally throughout 2018.

I've re-taken the wheel today as I wanted to describe my excitement at hearing Norah Hanson's poem 'Grafters' (from Sparks) on Radio 4's 'Poetry Please' last Sunday. It was chosen by a new-ish friend of ours, Hollie McNish, and you can hear Hollie read the poem, with an introductory discussion, on the iPlayer here. Jump to 5 mins 45 secs to just hear Norah's part (but if you do, you'll miss Seamus Heaney's 'Digging', among other treats).

Hollie's introduction pretty much hits the nail on the head as to why Norah's poetry is important (the first reason: it's great, but there are others given too). That poem is beautiful, and Norah did a great version of it for the Sparks audiobook, which I've uploaded here (or grab the whole audiobook here if you feel inclined, only £3.40). For once though, it wasn't the words or the performance that had me watery-eyed when I listened ... bear with me while I give you a bit of back-story.

There are a very small group of older poets, published in the first years of Valley Press, who took a chance on me when I had almost no idea what I was doing – in my first year of full-time publishing, for example, I was more-or-less running around like a headless chicken. I should have been laughed out of the industry, but instead these authors were patient, let me make mistakes, and gave me the benefit of the doubt. (Hopefully, decent-looking books were their reward!)

Without them, there would be no Valley Press today, and it's a concrete fact that without publishing Love Letters & Children's Drawings (Norah's first collection) in November 2011, VP wouldn't have made it past that Christmas. Because of this history, to hear Norah's poetry make it onto national radio, with McGough, Heaney, McNish et al (even though it only amounts to a minute of airtime) is genuinely one of the top ten moments of my career so far. Here's hoping it brings her a whole new readership. Tell your friends!

The other big excitement this week was the announcement that Antony Dunn's Take This One to Bed has been selected for New Writing North's tenth annual 'Read Regional' campaign. This means a large-scale stocking-up of the book by libraries in the north of England, a series of events in the region, and Antony writing a new introduction to the book, which you can read here (a great bit of writing in itself). A list of the events can also be found on that link, which includes visits to Hartlepool, Morpeth, Darlington, Newcastle, Leeds, Stockport, Bradford and Hull. A great time to catch this poet in action!

There was also a new episode of 'The Friday Morning Meeting', which (as you'll hopefully recall) is a publishing podcast I've been recording with Emma Wright from the Emma Press. You can hear the new show here, find the whole archive here, and in theory you can now 'subscribe' to the podcast via iTunes here (do let me know if that works). We're becoming quite proud of these programmes, I don't mind telling you – and the EP team are also proud of their new Anthology of Love, which looks absolutely fantastic, and features a handful of VP poets to boot. I've ordered my copy! It's definitely the best book published since our last newsletter (especially with our 'hairy' book, which I unwisely teased at the start of the year, still in production).

On that note, it's back to work now for me and the rest of the team. The submissions backlog is now down to 87 (from 296 when I originally paused subs), so great progress made there... we'll soon be able to open our doors again to new work (keep writing!) Wendy will be writing to you again in a couple of weeks' time, when our first graphic novel is expected to arrive on the shelves – so as ever, watch this space.