Eve Lacey on the 'Anthology of Sea' Submissions

Eve Lacey is currently editing an anthology of poems about the sea for the Emma Press. With just six days left in the call for submissions, we asked her to share some of her thoughts about reading the submissions and preparing to make the final selection. Submissions to The Emma Press Anthology of the Sea close on Sunday 21st June 2015 – read all the guidelines here.

One month since the call for submissions was released, and with only a week left until the deadline, my inbox has filled with sea. I read the poems more or less as they arrive, and sort them into groups to return to later. This involves spreadsheets and colour-coding, and I won't dwell too long on the individual poems until I have got a sense of the whole. 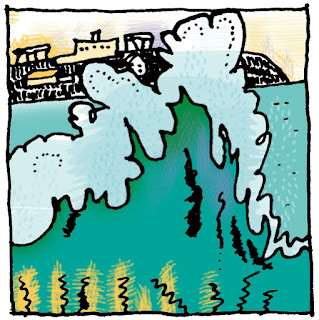 An anthology can be picked at in parts, but should also have a meaningful structure if read cover to cover in one sitting. In the early days of book-making, when parchment was a precious resource, Medieval readers created compendium texts of their favourite sections of verse, instruction and scripture, handpicked and hand-arranged, then bound together in a pocket library. From bestiaries to Bibles, anthologising is primarily concerned with weight: balancing one text against another, and condensing it all into one volume. Such assessment and consideration demands an economy of verse – like a poem writ large, each section must earn its place.

At this early stage the only question is whether I want to read a poem again, and again, and again. We have had submissions from the UK to Australia, from the Philippines and in translation from Portuguese. Perhaps unsurprisingly, writing on the sea frequently returns to the same motifs – the most common words have been flotsam and jetsam, but I've had lots of fathoming too – and similar sentiments recur with tidal regularity.

Next, I'll experiment with different orders and discover how the anthology should read as a whole. This is one of the most exciting parts, because it cannot be planned in advance. The trick is to find the balance between variety and thematic strength, and arrange poems so that they make more sense next to each other than they would alone.

I have learnt so much, in subject matter and form, from the submissions that have already arrived. But the theme is giant, and we want to do justice to its breadth. The poems arrive like messages in bottles, and we'll be collecting sea stories and castaway verse until the end of the week.

About the author: Eve Lacey is a writer and the editor of Furies (For Books' Sake, 2014), an anthology of contemporary women's poetry. She is also a librarian, a longlist judge for the Commonwealth Book and Short Story Prizes, and web editor for Thresholds: Poets in Residence at the University of Cambridge Museums. In 2012 she was awarded the David Almond Fellowship from Newcastle University and Seven Stories Museum to conduct archival research on disability in children's literature. Her work is published by the Emma Press, SALT, Textual Practice and The Next Review, and featured in Rebecca Goss's 'Heart Poem' series.
Posted by Emma Wright No comments: