Our newest children poetry anthology is Dragons of the Prime: Poems about Dinosaurs, edited by Richard O'Brien with notes by Will Tattersdill, aimed at children aged 8+. We asked the poets what inspired them to write their poems... 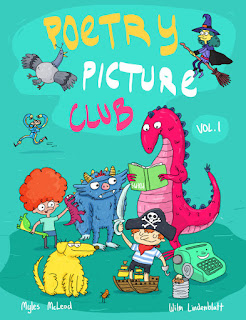 Myles McLeod
My poem is 'Roar, roar, T.rex'. In 2018 I was working with an illustrator friend Wilm Lindenblatt on a project which we called Poetry Picture Club, trying to produce one illustrated poem a week. We had a list of hot topics and of course one of them was dinosaurs. I was looking for a fun poetic form and had the idea of stealing the rhythm from a well-known nursery rhyme. When I hit upon Baa, baa, black sheep it all fell into place!

Finlay Worrallo
I was inspired to write my poem 'A prayer at bedtime' by my own childhood and everything I'd learned about dinosaurs when I was younger. I wanted to evoke a parent praying for their child using dinosaurs, the terms the child would understand best, to show their love as a parent and what they wished for their child's future.

Gita Ralleigh
Lingwulong shenqi, named in 2018, means ‘amazing dragon of Lingwu’, Lingwu being a town in China. The first mention of dinosaurs was 1700 years ago in China, when Chang Qu described 'dragon bones' – now known to be dinosaur fossils – and this is what inspired my poem. Lingwulong shenqi was found by a sheep-herder, showing there are still dinosaur discoveries to be made today!

Valerie Pate
I have two girls and I adore watching them learn and explore in museums. Their imaginations keep me inspired. So the narrative voice in my poem was based upon my daughters, who both really enjoy the Night at the Museum films.

Lesley Sharpe
My poem was inspired by the sheer age of the iguanodon Mantellisaurus atherfieldensis, which for me truly makes these animals creatures of the imagination – how can we conceive of something over 110 million years old? It's like thinking about how many stars there are in the sky, or how many fish in the sea. And also the fact that it is so complete – he has 80-90 % of his original bones, which shows the extraordinary capacity of fossilised bone to survive, and to reveal a blueprint which we still share in so many ways – jaw, rib, spine.

The other little known fact which fascinates me is that it was actually Gideon Mantell's wife, Mary Ann, who in 1821 discovered the enormous tooth that would first give its name to the Iguanodon. She disappears out of the story, of course, even though she also illustrated all his books and brought up all his children. Three cheers for Mary Ann!

B.J. Lee
The first time I heard the word 'dreadnoughtus' I thought, there has to be a poem in that. And then I wrote my playful poem 'The Dreaded Dreadnoughtus' in about half an hour after completing some research on Gondwana, the supercontinent where I believe the titanosaurs must have lived. 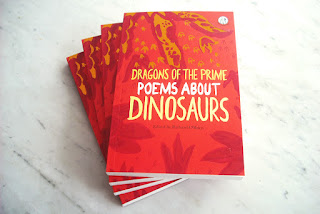 Dragons of the Prime: Poems about Dinosaurs is on sale now – buy your copy for £10.99 from our webshop!
Posted by Emma Wright No comments: