"Writing into a space remains the most exciting writing time I’ve had." James Trevelyan on publishing his pamphlet with the Emma Press


Over the course of our call for pamphlet proposals, we'll have some of our existing pamphlet authors writing about their experience of having a pamphlet published with us. Here we have James Trevelyan talking about his pamphlet, DISSOLVE: to LA. 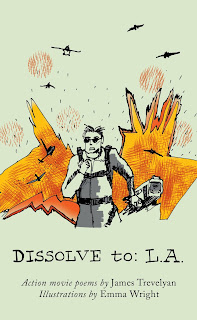 I don't think I write good poems. Perhaps it’s an affliction of many an emerging - and probably established - writer: self-critical, confused, downbeat; overwhelmed by the weight of other people's good poems: memorable, affecting, published!

Consequently, at various times I struggled to see myself with a publication of my own. Pamphlets for a debut writer seemed to me on the whole to be a short collection of your best work to date; your stepping stone to that first book. It wasn’t something, no matter how many submissions I sent out in hope, that I felt I was particularly close to achieving.

That was until I went to an Emma Press launch for John Clegg’s Pick Captain Love and the Five Joaquins - a mesmerising short sequence telling the strange tale of mistaken identity in the American Wild West, performed in its entirety by John with musical accompaniment. This is what I thought a pamphlet could, maybe should, do. There was a joy in the work, a vibrancy in a story that John wanted to tell. And he chose to do so via poetry, because that was the medium that it needed to be in, the one that could bring the most nuanced, profound and humorous take on the tale.

I left that performance buoyed - as sometimes poetry events can do - that perhaps I wasn't all that far away. I had stories to tell too. I thought back to those poems I'd felt most joy writing and wondered could I do something with them, could I write more?

I wrote my first action movie poem a couple of years before that, at the tail-end of my MA. A coursemate had brought a poem in the voice of a minor character in a Shakespeare play - an apparent poetic tradition about which I hadn’t been aware, and one that I was instantly intrigued by. Weeks later I was attempting to write a screenplay (failed) and was reading the Terminator II script to see how James Cameron had presented long periods without dialogue. There I discovered a character named LLOYD. With only one line and little screen time - and certainly no real need to be named in the script - LLOYD, I thought, would be the perfect subject for a response to my newly-discovered form: a minor character poem in something I’d spent two decades unknowingly studying - loud movies. I wrote one for HAWKINS, the first of many ill-fated characters to die in Predator, the following week and found I’d hit on a way of exploring a number of the ideas I’d wanted to in poetry through these characters.

I remembered these poems as I left John’s launch, deciding to write a few more about different films and send some of them to the Emma Press in their next submissions window. Having my proposal for a Pick accepted was an exhilarating and daunting moment. I wanted to write at least 10 more poems, and needless to say I’d not written more while Emma was considering it. But writing into a space remains the most exciting writing time I’ve had. That someone had confidence in my work, and had agreed in principle to publishing it, meant a huge amount and completely freed up the process. For the first time, I felt like a writer.

Bringing DISSOLVE to: L.A. to publication with the Emma Press was a wonderful journey: a collaborative, creative and rigorous process, led by a few crucial meetings with Emma and several editorial emails back and forth with Rachel, honing lines into shape, forcing rewrites and cutting some poems altogether (sorry Robocop). It was very special to me that Emma herself was illustrating the pamphlet. I remember screenshotting the fleeting glimpses of the characters I’d written about and sending them to Emma. A day or so before the pamphlet went to print, Emma sent along the final PDF. Where there had been blank pages before were perfect illustrations of these characters I’d spent so much time with, whose moments on screen had passed by in seconds, now inked next to my poems: Cougar’s stickered helmet, Benny taking cover, Lloyd’s arms up in surrender. It is just a small part of the Emma Press’ attention to detail and care displayed in visual form, traits I am grateful to have been shown through launches, festival readings and general bonhomie from publication to the

James looks knowingly at the horizon. He discards the toothpick from the corner of his mouth, lowers his aviators to the bridge of his nose to regard the setting sun. He looks knowingly down the barrel of the lens, at us. Slow-mo extreme close-up. He winks.

DISSOLVE: to LA is available to order on our website. You can also find out more about our call for pamphlet submissions here.
Posted by Yen-Yen Lu

Email ThisBlogThis!Share to TwitterShare to FacebookShare to Pinterest
Tags: authors on their pamphlets, DISSOVE: to LA, James Trevelyan