On publishing, feminism, mixed ethnicity and being a hot mess

I was a mess yesterday. I was meant to be going to an indie publishers’ event in Nottingham that started at 7.30pm, but I decided to get an off-peak train to save £6 and so I arrived in Nottingham at 4.30pm with three hours to kill and the beginnings of a suspicion that three hours of my time was probably worth more than £6.

So I wandered aimlessly around the shops for a couple of hours, had a sandwich on some repurposed crates in Rough Trade, had a meeting with an Arts Council guy about my next big idea, and finally got to the event at 7.40pm. Whereupon I discovered, in this order, that a) the event had started bang on time and the panel discussion was well underway, b) I was meant to be on the panel, and c) while the panel discussion started at 7.30pm, the event had actually started at 4.30pm.

I found out the last bit just as I left, half an hour before the end of the event so I could catch the last train back to Birmingham (which meant I spent a total of one hour and twenty minutes at the event). During my two-and-a-half hour journey back, I took a good hard look at myself and what I had become, or – I concluded – what I have always been: I’m a mess.

I felt bad about missing the chance to spend more time with my fellow publishers in the earlier part of the day, stupid for not realising I was on the panel, sorry for turning up late to the panel, pleased that (once I’d slithered into my seat on the panel) I’d spoken about the Emma Press for a reasonable length of time instead of wrapping it up as quickly as possible, and touched that several of the other publishers said nice things about me and spoke to me afterwards. But eventually, through this familiar mix of pleasure and shame, I felt strangely – selfishly – elated. 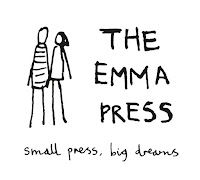 I try to be a good feminist. I believe that feminism continues to be necessary and that people should be allowed to define their own feminism. The Emma Press was founded on feminist principles and I want it to be successful so that there’s another woman at the head of a major-league publisher. On a personal level, I want to be successful so that I can be a role model, and not just for other women.

But I also know I’m not a good feminist. I feel like I’m constantly shuttling between bits of advice I’ve internalised about how to succeed, and I have a hunch that most of these nuggets are sexist. Be the most professional, the most polished, the most "presentable" (pace Private Eye), because you’re battling against millennia of bad PR against women. Don’t self-deprecate, because people might believe you. Don’t use filler words or apologise too much. Be more like a man: ask for a pay-rise and don’t worry about talking for too long in a meeting. Be your own true womanly self, whatever that means.

I also try to be a good representative of a mixed-ethnicity person, but I know I’m failing at that too because so far I’ve not mentioned or talked about it publicly at all. My ethnicity is such that I don’t know what to call myself (White-Asian? British-Chinese? English-Vietnamese? British-Chinese/Vietnamese?), which makes me wonder about the concept of ethnicity, which in turn makes me very uneasy about discussing it in case I say something wrong. But I know from personal experience that role models from different backgrounds make a difference, so I’ve tried to start stepping up, not just by publishing an anthology of poems about home and belonging but also by placing myself at the front of the Emma Press even though I don’t like people looking at me and even as I have another hunch about the advice I’ve internalised on this front – be visible, be successful, be inspirational. Why?

With all these allegiances – which I freely admit I have taken upon myself and so far no-one has tried to shame me about – I feel like I am always on my best behaviour in public, presenting my best self in the hopes of being a credit to whomsoever needs me as an ally. I try to be good because I want to be good, but yesterday, when I was a mess in Nottingham, I felt a sense of relief. I didn’t feel like anyone would want to claim me for their cause, me tumbling through the day in two statement necklaces and a bodycon dress stretched over a thermal vest, armed with diminishing levels of sobriety and escalating levels of weird social energy. I was a credit to no-one and I was letting no-one down except myself, and that felt good. I’m going to think a bit more about that.

Further reading:
* Poem in which my better self is an eternal debutante, by Rachel Piercey
* Homesickness and Exile: Poems about Longing and Belonging (Emma Press, 2014).
Posted by Emma Wright